My first look at the Drupal 8 beta

Finally found some time to try out the Drupal 8 beta. I was pleasantly surprised.

So, let's get started: Getting Drupal 8 to work on my Mac's local webserver was quite easy. The installer was easy to use, as usual. It told me how to set directory permissions and what needs to be done from my side. I chose an SQLite database. Installation took about two minutes altogether.

I then encountered some problems as my local Apache webserver was not properly configured (I was unable to load any pages except for the frontpage). It took me just a few minutes to the issue, but I feel that Drupal should have warned me that mod_rewrite and AllowOverride had not been turned on and that this was a problem. In earlier versions of Drupal, clean URLs had to be turned on by the administrator but in Drupal 8 they are turned on by default and the webserver is expected to be set up properly already.

After everything was finished I was greeted with a familiar screen of an empty Drupal installation: 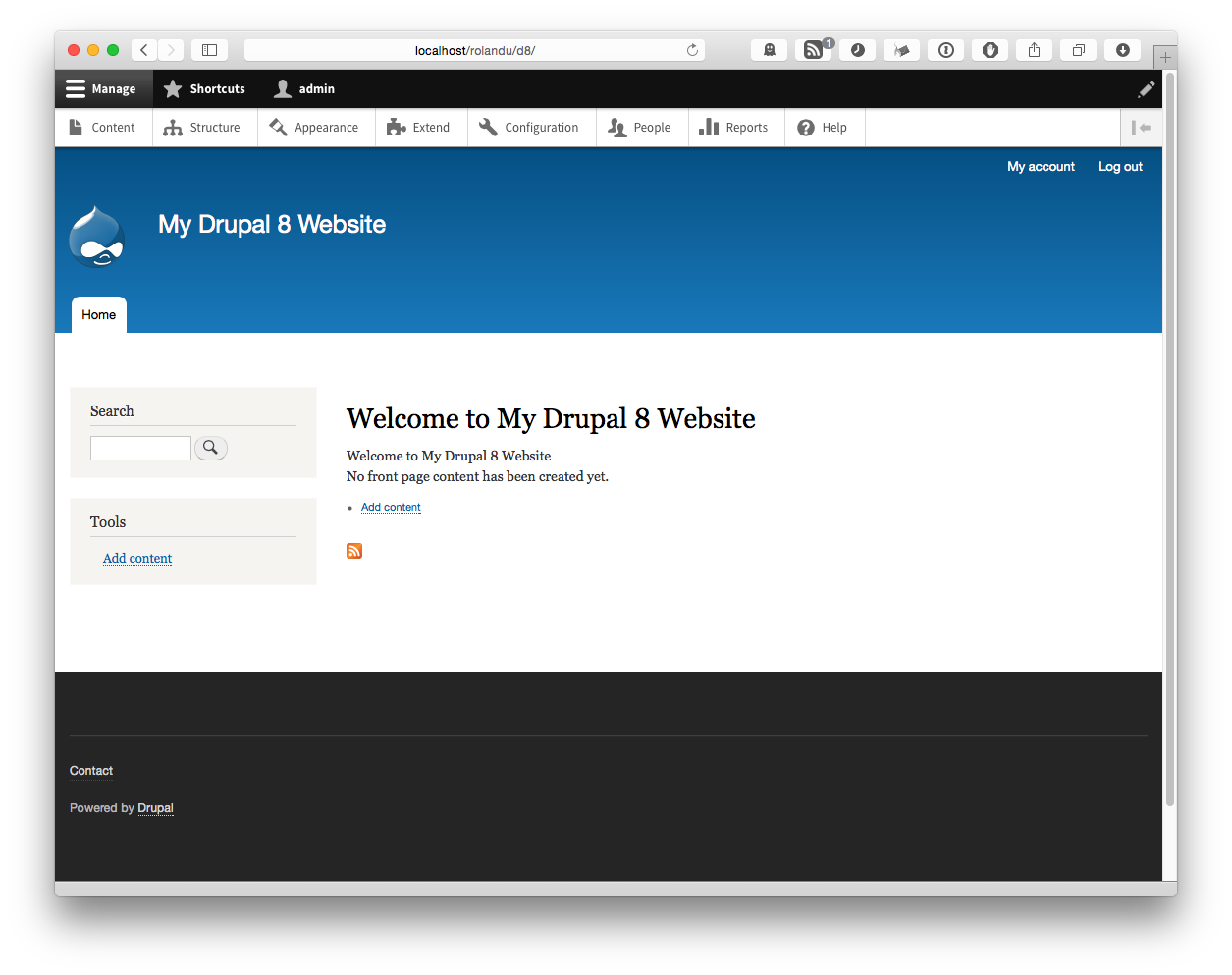 I really like the new user interface. A lot of cleaning up has been done. The article creation page now fits on a single screen and contains a WYSIWYG editor out of the box! 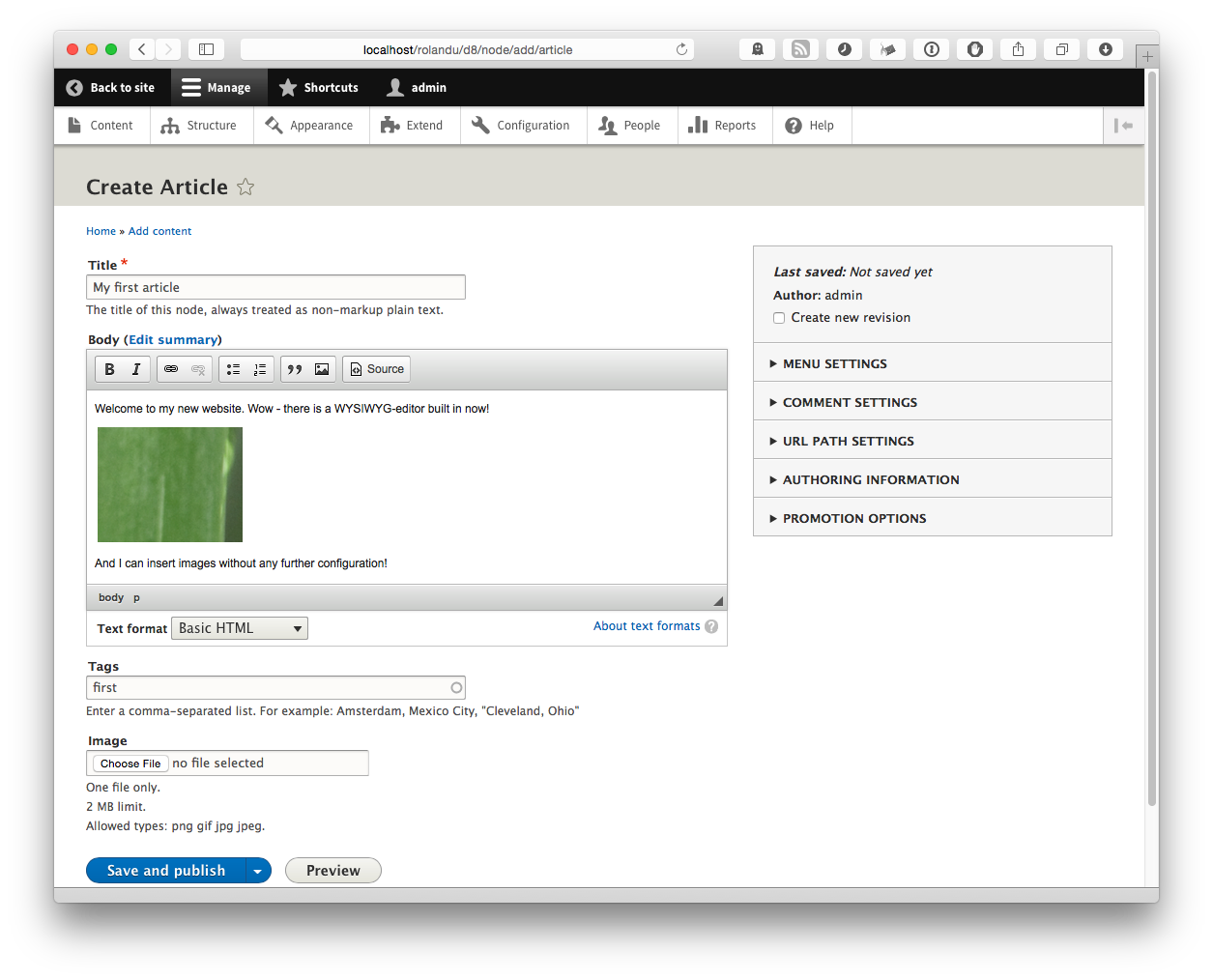 Drupal still ships with a recolorable Bartik theme and now also includes a base theme called "Classy" which can be used for developing own themes. I never developed themes myself from scratch so I will not discuss this in further detail.

A lot of popular modules are now included in Drupal core: Entity, Views, Migrate, Multilingual... The content is now entirely implemented using fields and entities and most of the default overview pages are now Views (e.g. node, admin/content). This should make a lot of tasks easier and add flexibility. 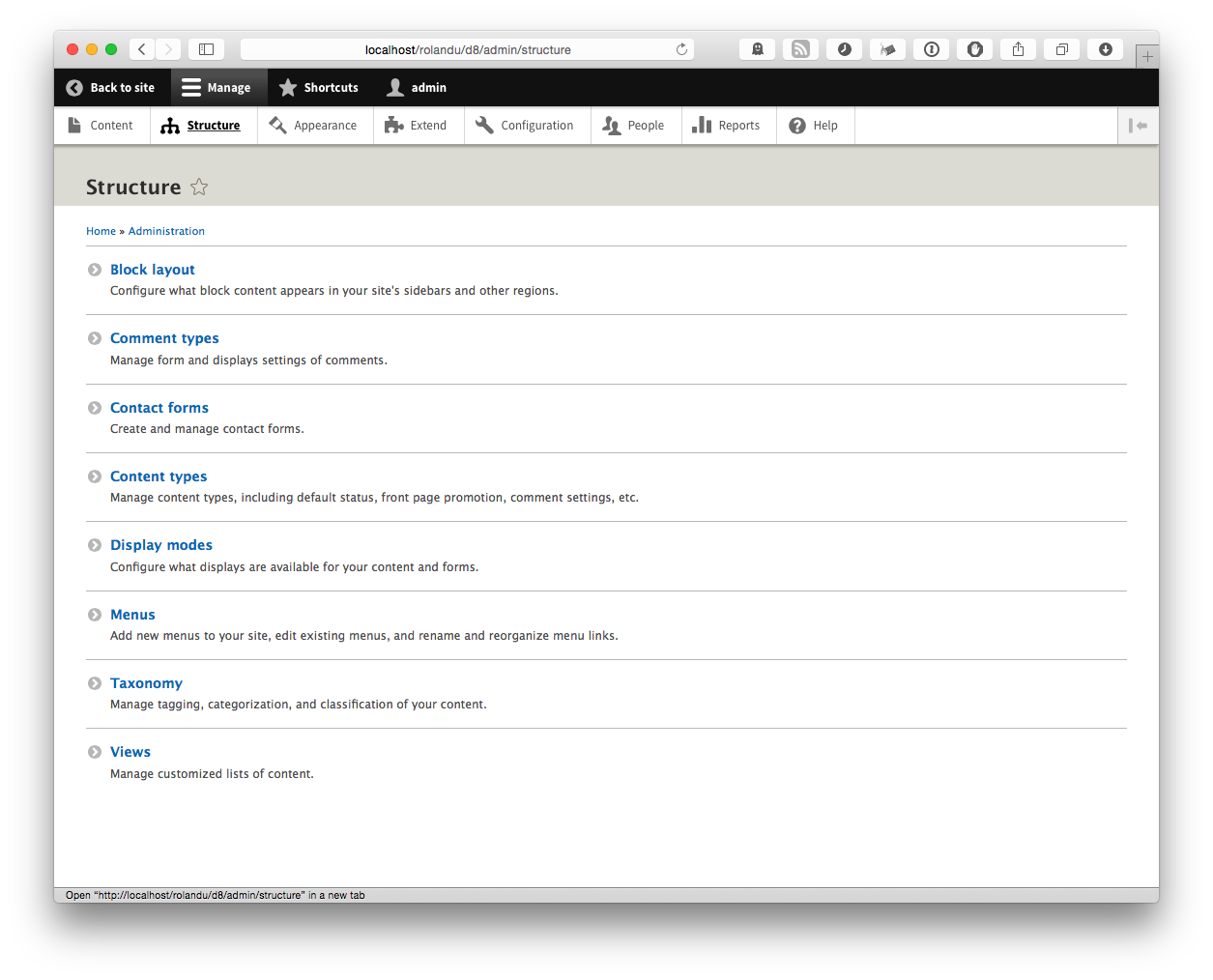 The interface to create and edit views hasn't changed. I always liked the interface, but a lot of people I worked with found it too difficult to use. I cannot imagine how it could be simpler without loosing flexibility. I guess that configuring Views will remain to be a task for advanced users. 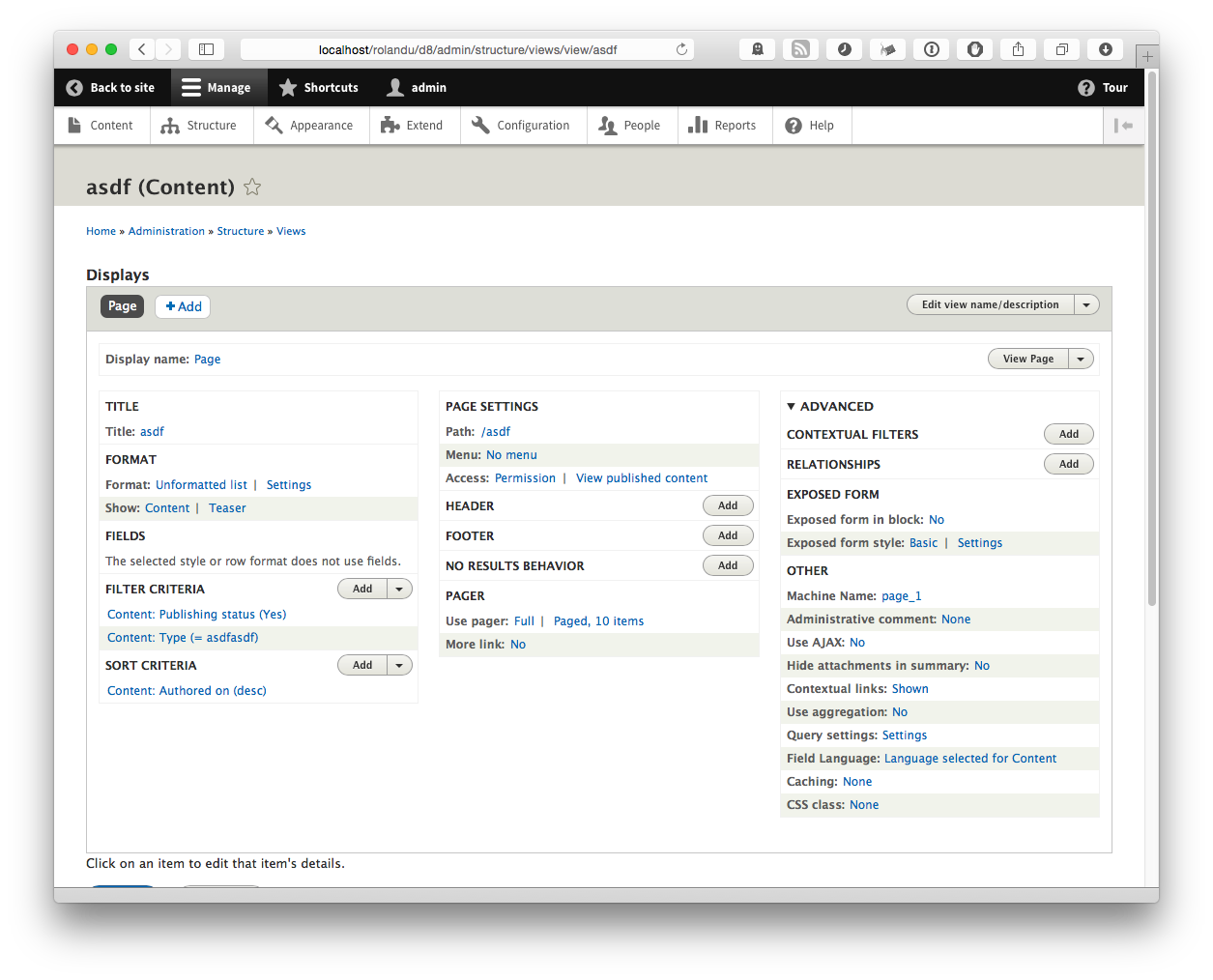 While a lot of modules already have their Drupal 8 versions ready, some of the modules that I wanted to try out did not. I hope that upgrading will be easier than from D6 to D7 and adoption will be faster this time. If I remember correctly, it took more than a year until there were more sites using Drupal 7 than sites using Drupal 6; module development was very slow during that time as many developers maintained two versions of their modules. 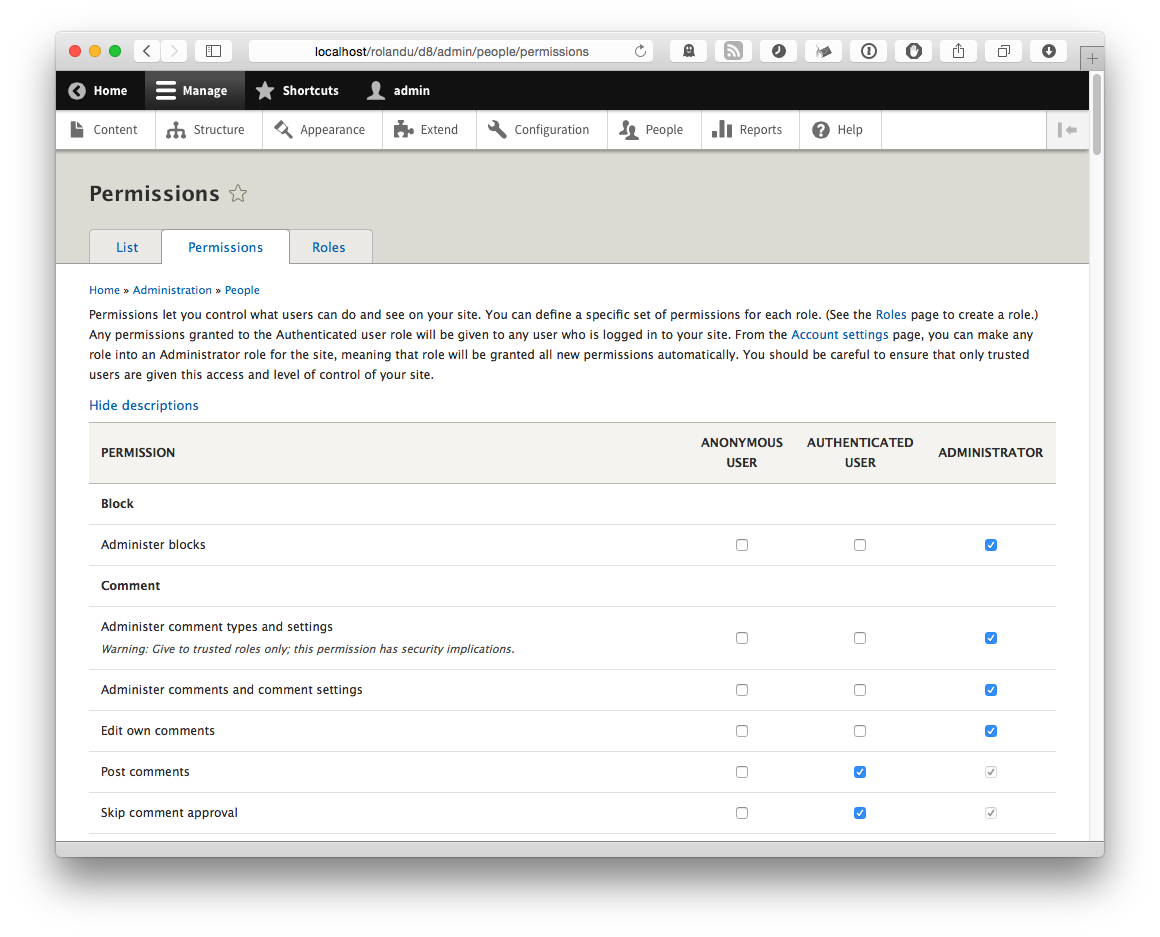 To sum up: People sometimes ask me to tell them the pros and cons of Drupal versus other content management systems. I usually tell them that in Drupal, simple tasks are a little more complicated than in other systems, but on the other hand it is possible to complete very complex tasks which are impossible on other systems. I guess Drupal 8 is about still keeping the complex tasks possible while at the same time making the simple tasks easier.